You’ve seen it before. Maybe on a forum, a comment section of a news article, or someone’s Twitter feed. Things don’t look right. There seems to be a bunch of new people in your neck of the internet posting extreme opinions and even threats. It’s a brigade.

Brigades occur when online trolls group together to flood another site (or subsection of a website) with their message. Since we are ReviewMeta, a platform to analyze Amazon reviews, we are going to take a closer look at review brigading. You probably know a few products that you might think have been brigaded, if you want your suspicions confirmed or denied you can just run them through ReviewMeta for an quick report.

Today, we’re looking at the anti-Amy Schumer brigade that has infested her new book with 1-star reviews.  An article in The Week traced this brigade to a Reddit subreddit /r/opieandanthony, where they openly discussed the brigade.

This is unquestionably a brigade. And yes, this is seriously how some people spend their evening. Writing fake reviews of a comedian because two hosts of a defunct radio show don’t like her. I wonder if they put that in their Tinder profiles.

From August 16th to August 18th the Reddit brigade turned the reviews section into a dumpster fire.

We then took a look at the distribution of ratings. What we found looked like the 2000 Presidential Election; the reviews were split down the middle between 1-star reviews and 5-star reviews. 96% of reviews are in these extremes.

This extreme polarization coupled with the high percentage of unverified reviews made us think that there might be backlash effect occurring. When there is a ton of obviously fake negative reviews there is often a backlash of reviewers who post fake 5-star reviews in a pursuit of online vigilante justice to “balance out” the average review rating.

Looking at star distribution by review date gives us evidence of this backlash. On launch day, August 16th, 64.7% of the reviews gave the product one star. The reviews submitted on August 18th however show a complete reversal of this trend with 65% giving a five star rating and 33.8% giving a 1 star rating. This change in rating occurs even without an increase in the number of verified purchasers and occurs the day after a Huffington Post article drew attention to the brigading. 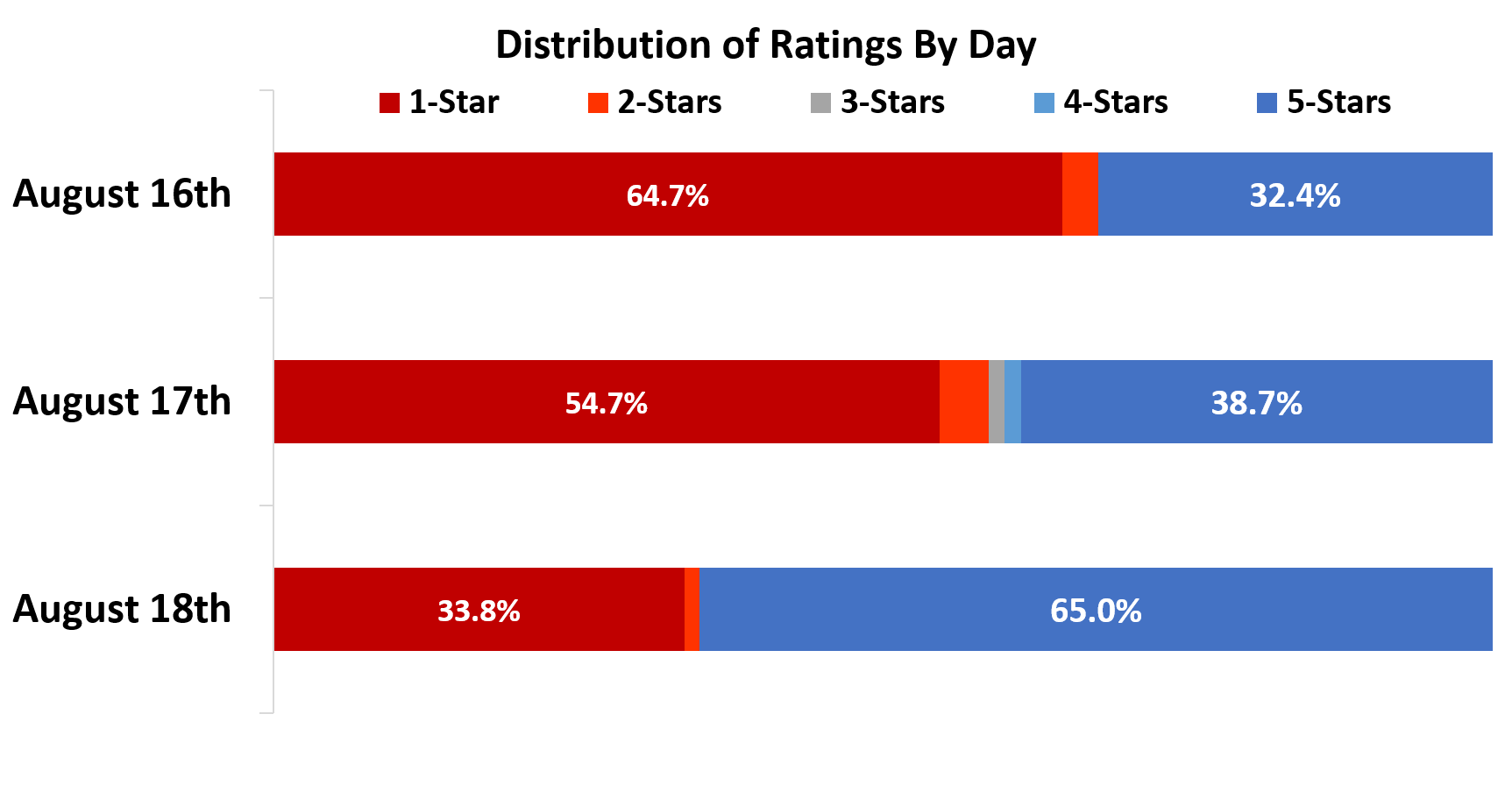 We also looked for the words “reddit” “trolls” and “fake” in the review text or title and we found that 11.6% contained one of those words, of these 81% were unverified. The overall average rating for these reviews was 4.4.  These were reviews called out other reviews more than actually reviewing Amy’s book.

Because of this brigading and counter-brigading the reviews were completely useless. It turned into a flame war where instead of discussing the book you get reviews like this:

“None of what Big Amy does is original. She looks like a cross between an oversized cabbage patch doll and the Michelin tire man. Even her physique and face is a rip off. She’s a fat pig and her comedy stinks.”

“The 1 star reviews on this book are because a group on reddit decided to brigade this book because Amy is a powerful woman and a feminist. The haters of the internet actually banded together to down rate a bestseller because of their manbaby issues. Keep going strong Amy you are an awesome woman and an inspiration to everyone.”

“While the 1 star reviews may have been trolling. There is very clearly a PR effort underway to just spam this book with 5 star reviews. Amy Schumer gets away with stealing jokes, completely selling out to the regressive left feminazi crowd (listen to her 5 years ago), and being a bad writer. You fat feminists are worse than the “basement dwellers” with your blind reverence for this monster.”

Now if you read these reviews would you have any idea what the book was even about? They insult the author or they are calling each other names while at the same time accusing each other of brigading. If you are an outsider and don’t spend too much time on the internet you’ll have no idea what is going on: “Why do people on the internet hate Amy Schumer?” “What’s a basement dweller?”  It’s part of the dark side of the internet spilling over to a place more people can see it. The only upside is that the manipulation is fairly obvious. If you read the reviews you can see it pretty clearly. But not all people do that, they simply look at the average rating see the bad rating and move on.

After a day of press about the brigade, Amazon cleaned house. One of our standard tests is checking for deleted reviews. We found that 168 reviews had been deleted. The average score of those deleted reviews is 2.7. Most of the deleted reviews appeared to be unverified reviews which has dropped to 16% overall now.  The average rating is now 4.4.  You can check out our full report here and you can see how its shifted. It has normalized a bit. But the brigade doesn’t seem to be stopping – we already see reviews popping up like this: 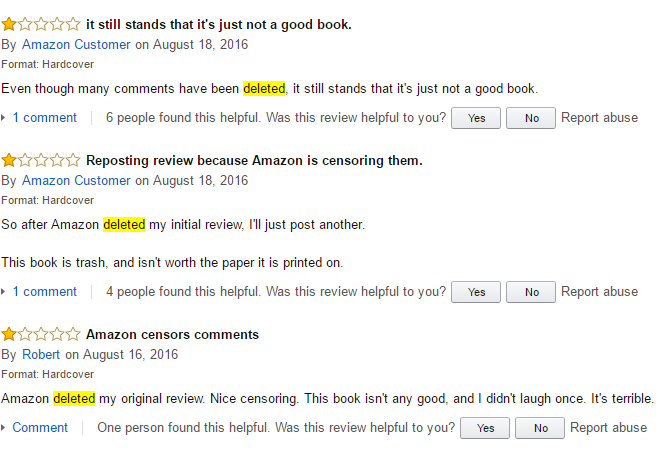 Like online rats, these brigaders can’t climb back into the dark hole of the internet where they came from. And rather than preventing users from writing these types of reviews, Amazon will just keep removing as needed — at least until the press dies down.

We don’t know what the secret formula that Amazon uses to delete reviews. But it is reactive damage control rather than using preventative measures. It seems to rely heavily on brigades getting press and people reporting reviews. There are no measures taken like only allowing verified reviews during the launch of a product or blocking new reviews when it is clear that it is being brigaded. Rather than taking preventative measures, Amazon is just doing damage control. And it isn’t fair. While Amy Schumer is a well known star and if anything this brigade will help her sell books, the same can’t be said of upcoming authors or small business owners. Brigades like this could tank the launch of a book or a product. We need a better system.

We are going to do some more digging on this topic in the next few weeks. We want to take a look at how brigades affect review ratings in the long term. This includes looking at Hillary Clinton and Donald Trump’s books in a bit more detail.  But also some less known products that might have flown under the Amazon brigade radar.

While you wait you wait for our write-up you can take a look our reports on Hillary Clinton’s Hard Choices and Donald Trump’s Crippled America. You can also analyze any Amazon product through ReviewMeta. Run a few products through and let us know if you find anything unexpected results! Or you can have that analysis while you browse, by getting our free browser extension for Chrome or Firefox.