How Accurate is ReviewMeta.com?

This is a question I see frequently asked.   Unfortunately I also see it frequently answered by those with opinions based on only a few anecdotal data points.

My answer to this question has always been “I’d like to think the algorithm is pretty accurate, but ultimately there’s no way to verify it“.  This is because I believe it’s impossible to determine with 100% accuracy whether a review is fake or not.  Sometimes people point out a review and say “this is fake and not getting detected by ReviewMeta”, but you have to wonder: how do they know it’s fake?  It’s important to remember the difference between an opinion and a fact here.

The challenge is that there is no “Answer Key”.

We don’t exactly have a reliable answer key with which we can compare our data against.  Or at least that’s what I was always telling myself.

What I recently realized is that our deleted review data might give us some interesting insights.  It’s not perfect data, but at least it gives us something to work with.

The first thing to do is disclose everything we know about the deleted review data (including the obvious shortcomings).

The deleted review data is the closest thing we have to compare.

So hopefully you’re still with me even after I just disclosed all the shortcomings of the data.  I’m trying to make sure it’s crystal clear that the data isn’t perfect, however it’s the best we’ve got, so we’ll jump right into it.

We’re going to look only at reviews in our dataset that were posted to Amazon sometime in 2017.  I chose this date range for a few reasons:

For every review that we analyze, we assign a weight.  Every review starts with weight=100 and may lose points for failing different tests.  Internally, reviews can be well below a weight of 0, however the lowest score we will display is 0.

On our reports, you can see this number listed as “TRUST”: 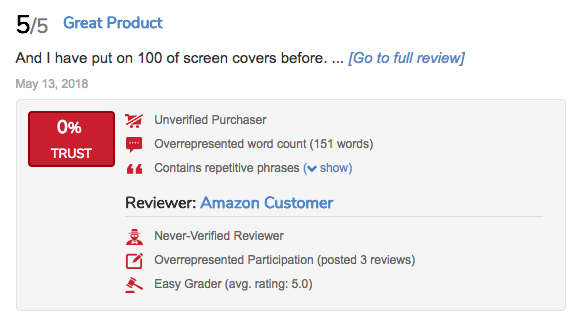 If we notice that a review is missing, we do not update the weight.  We only update the weight of reviews that are visible on Amazon.  So once we mark a review as “deleted”, we can still see what our weight calculation was for that review before it was deleted.

Looking at the average weight for the Deleted and Non-Deleted reviews in the above mentioned dataset, we see that the reviews which ultimately ended up deleted were rated as MUCH less trustworthy by our algorithm:

Hurrah!  This result is huge!  There is a substantial amount of correlation between our algorithm and Amazon’s own efforts.  Seems we’re on to something here.

Let’s dive further into the details.

Below is a distribution of review weights (rounded to the nearest ten with a minimum of 0).  As you can see, reviews that receive a weight of 0 or below are 6x more likely to end up deleted from Amazon as reviews that have a weight of 95 or better.

The data clearly shows that we’re definitely on to something (yet still not perfect).  As already described in detail, the answer key we’re using (the deleted review data) is far from perfect, but at least this shows there’s a solid connection between our estimate and what ends up being removed from Amazon.

So the next time someone asks “Is ReviewMeta accurate?”, you can confidently answer “I think they’re on to something!”.


8 responses to “How Accurate is ReviewMeta.com?”