FakeSpot vs. ReviewMeta for Analyzing Reviews

We often get asked the question “How is ReviewMeta different than FakeSpot?” The goal of both ReviewMeta and FakeSpot is to empower consumers to cut through the noise and deception of suspicious reviews, but there are still some objective differences worth pointing out.  The ReviewMeta platform embraces transparency and customization to give nuanced insights to a product’s reviews.

Note: This article was written on August 10th, 2016, so things may be different on either site.

For this article, we compared the review analysis of the same product (Beard Grow XL) on both FakeSpot and ReviewMeta.

The first thing you’ll notice is the different ways each site summarizes the results.  FakeSpot displays a letter grade (A, B, C, D or F) and the detected percentage of “low quality reviews”.  This helps the consumer get a sense of how trustworthy the reviews are for the product, but doesn’t go much beyond that.

ReviewMeta, on the other hand, shows one of three outcomes (PASS, WARN or FAIL) and a recalculated average rating and number of reviews after filtering out the suspicious ones.  While this is still just an estimate, it’s helps consumers get a sense of what the honest reviewers are saying about the product.

Additionally, ReviewMeta shows you exactly how we come up with each adjustment and gives you the power to edit the adjustment yourself.  So, for example, if you think all unverified purchases should be completely removed, you can slide the dial all the way to 0% which recalculates the score after removing all unverified reviews.

It’s important to remember that unnatural reviews do not necessarily mean the product is of inferior quality.  While inauthentic reviews are sometimes created to help push a poor quality products on Amazon, we’re seeing that sellers of high quality products are also being forced to generate inauthentic reviews just to stay competitive.  So if a product gets an F on FakeSpot or a FAIL on ReviewMeta, it still might be worth buying.

Both ReviewMeta and FakeSpot work with Amazon.com, Amazon.co.uk, and Amazon.ca.  However, only FakeSpot supports Amazon.com.au while only ReviewMeta supports Bodybuilding.com

FakeSpot explains how their analysis works on their How it Works page:

Fakespot utilizes numerous technologies to validate the authenticity of reviews.

The primary criteria is the language utilized by the reviewer, the profile of the reviewer,correlation with other reviewers data and machine learning algorithm that focuses on improving itself by detecting fraudulent reviews.

The technologies include: profile clusters, sentiment analysis, cluster correlation and artificial intelligence intertwined with these functionalities.

The biggest methodological difference between FakeSpot and ReviewMeta, is that FakeSpot primarily analyzes the language of the reviews which isn’t the case with ReviewMeta.  We only look at the text of the review in 3 of our 12 tests: Phrase Repetition, Word Count Comparison, and Incentivized Reviews.  The other 9 tests are looking at data beyond the language.

Also, FakeSpot’s algorithm may be hard at work in the background, but they don’t share too many details with the public besides a few bullet points about what they found in the reviews. 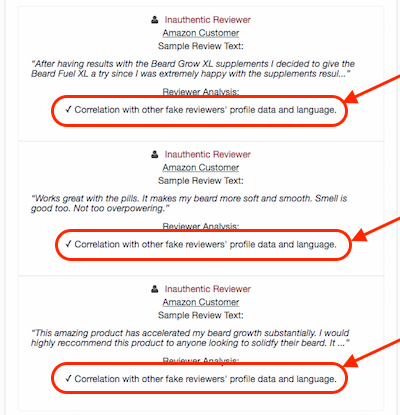 They also show 3 example inauthentic reviews with a broad explanation as to why they are low quality.

At ReviewMeta, we chose the approach of showing our work for a few reasons:

We show the detailed results of all 12 tests that we run and include examples of reviews that are flagged for every single test.  Our goal is to create a tool that enables consumers to have access to as much information as possible, so they can effectively research the reviews and make an informed decision.

FakeSpot’s extension seems to just help you get to the analysis on their website.  When looking at a product on Amazon, you can click their extension to open the analysis on FakeSpot.com for that product in a new window.

Not only does ReviewMeta’s extension help you get to their analysis from a single click, it also instantly provides you with the adjusted rating without having to touch a thing or leave the page.  Also, the color indicates whether the product got a PASS, FAIL or WARN.

We believe that the more tools that are available to the consumer to help them make informed decisions, the better.  Fake reviews are flooding every industry and there aren’t enough resources available to help combat this.  Brands have a massive financial incentive to acquire as many positive reviews as possible, and many aren’t being honest when doing so.  The consumer has a right to know what’s going on behind the reviews they’re reading.

At ReviewMeta, we plan to continue improving our tool, further analyzing the data to identify more issues with the current system (see our in-depth analysis of incentivized reviews here) and expand our service to other review sites.


11 responses to “FakeSpot vs. ReviewMeta for Analyzing Reviews”