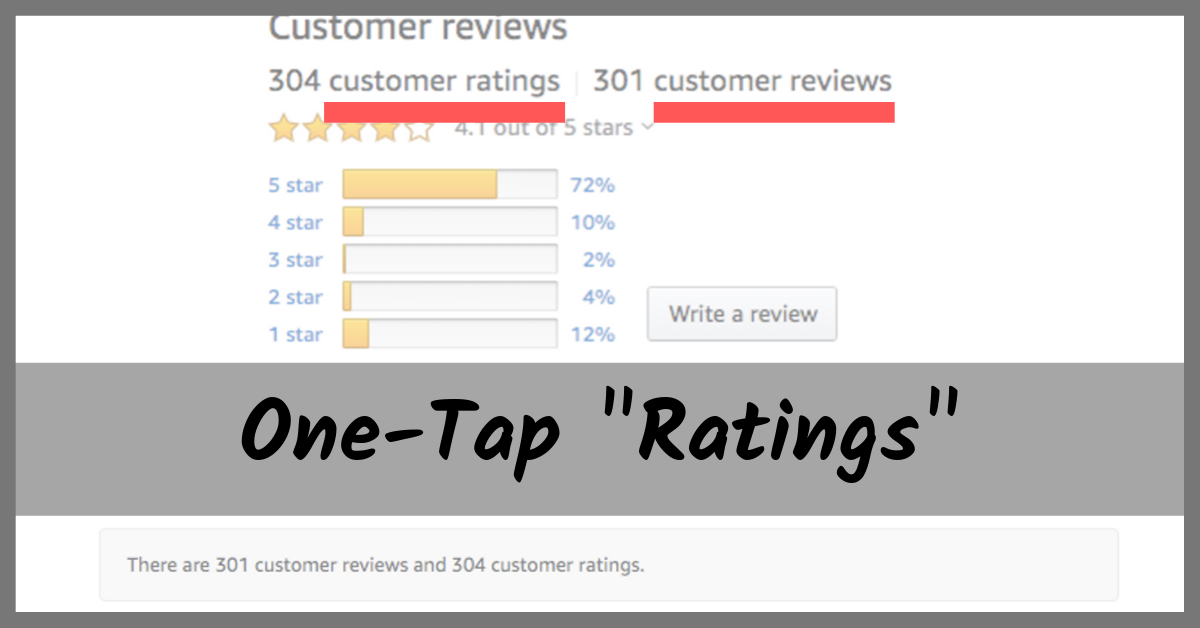 A few weeks ago, Amazon announced they are testing a new “one-tap review” feature.  This enables verified purchasers to rate a product without having to write a title or review.

“We are testing a feature that allows customers to leave feedback easily while also helping shoppers get authentic customer ratings on products from a broader set of shoppers,” an Amazon spokesperson said.

Since the announcement, we’ve been wondering how Amazon would be displaying these one-tap ratings – and today we found out.  At the very bottom of the product listing, below the reviews, you’ll see a notice about “reviews” vs “ratings”:

On the customer reviews page, you’ll see this at the top: 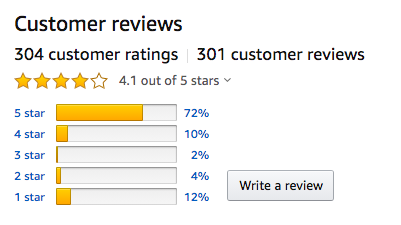 Unfortunately, there is absolutely no information provided about the customers who leave “ratings” and not “reviews”.  All of these “ratings” could have been left on the same day by accounts who only give 5-star “ratings” to one brand, and you’d have absolutely no way of knowing this critical information.  All that is displayed is the number of “ratings”.

ReviewMeta (along with everyone else) is unable to analyze these “ratings”.

It’s impossible for anyone (including ReviewMeta) to examine these new “ratings” and get a sense for whether they’re from honest customers or if it’s just paid fluff from the seller.  Even before ReviewMeta existed, shoppers have been able to read reviews and use their intuition to determine if something sounded too good to be true.  This feature no longer empowers shoppers in the same way.

Unless Amazon changes their mind and decides to be transparent, ReviewMeta will simply show a small disclaimer on our reports that we’re essentially ignoring the “ratings” generated from the one-tap reviews.

Amazon is making another step in the wrong direction, away from transparency.

Last year, we wrote an in-depth report about what Amazon reviews should look like.  Generally, we believe that Amazon should be increasing transparency, not creating features that enable scammers to better hide their footprints from the general public.

However, since then, it seems they’ve only been going in the opposite direction.  Earlier this year, they decided to only display the first 500 pages of reviews instead of showing all of them.  We’re not optimistic about where they go from here.

Furthermore, this feature hurts honest sellers.  Fake negative reviews are a thing, and any sellers suffering from a brigade or fake negative review attack will have little recourse available to combat these hurtful reviews.

Amazon has not yet confirmed that this will be a permanent feature.  We’ll see if they decide to keep it.

Update:  They are keeping it.  Already seeing rampant abuse:

This pair of headphones boasts 5,068 5-star “ratings”, but not a single review. What are the odds? @Amazon, we told you that your “One-Tap Rating” system was going to lead to more abuse.https://t.co/y5a47ATSH4 pic.twitter.com/V9xIZut2Os

Leave a Reply to ReviewMeta.com